With all these highly specialised jobs emerging, I wondered what to advise those candidates who have just come to the industry – should they put their efforts into being a generalist and developing their skills across the end-to-end UX spectrum, or should they find that niche that really interests them and focus in on one specialist area? For some answers to these questions, I reached out to the experts, those who have worked in UX since it was called usability, Human Computer Interaction, or something that was given a moment’s thought at development stage.

I asked Andrew, should candidates specialise in just one area of UX? “Absolutely not. Designers need to be adaptable and able to move from company to company, role to role.”

He made a valid point regarding Lead and Management roles too. If candidates are thinking about their career in the long-term then a generalist approach makes sense. “It is much easier to manage a team if you understand what everyone is doing. You don’t have to be an expert at everything but some knowledge across the whole UX spectrum goes a long way.”

Sherwin agrees that an understanding of the end-to-end process is a necessary start point. He wore many hats in IT before he got to where he is. His advice is “go broad before you go deep.” Learn the whole process and only when you are confident on everything from research to implementation, then decide what you enjoy most or what you are best at and focus on that.

Peter has worked for some of Melbourne’s best known large organisations and while he has worked in general UX roles in the past, it is research, people and the application of user research to inform design that has always driven him. He is an advocate for specialists, especially when it comes to providing extra support to the core UX team.

“Generalist UX practitioners have a good grounding in many UX skills and sit well in multidisciplinary teams. A specialist, for example a user researcher, can work in a team supporting the core group. They can also work ahead of the product roadmap, providing insights ahead of time, especially if a longer piece of research such as a diary study is required. A specialist can also coach and mentor people, and help teams synthesis insights for a shared understanding of a user or ecosystem.”
When the end-to-end designer doesn’t have the time or aptitude to go deep into a particular area, a specialist can come into their own.

Similarly to Peter, Ben has contracted for some of Melbourne’s biggest organisations yet he maintains that generalists are far more valuable than specialists. He prides himself on being an end-to-end designer and that means he can come into a project and add value at various stages. He only warns that “you can be a generalist in nothing if you spread yourself too thin.”

At Xpand, I have been asked by clients to find candidates with a T-shaped skillset, experience across the UX spectrum but a particular depth of knowledge in one area. However, only when speaking to Craig did I become aware of the “W-shape.” Craig was in UX before it was called UX, and comes from a visual design background. These days, he would say he has a breadth of knowledge end-to-end but is particularly strong on research, stakeholder management and UI.

Whether you go generalist or specialist, Craig reckons people’s titles aren’t reflecting their skillset and is an advocate for people spending longer in their chosen craft before they or their company promote them to senior. In Craig’s opinion, those with under 5 years’ experience are Juniors, 5-7 years is Mid-weight and only after 7 years can you be classed as a Senior Designer, that is, “once you have tried and failed on 3-4 big projects.”

Similarly to Craig, Ryan judges candidates by how they coped when it all went wrong and asks in interview for them to describe a big failure and what they learned from it. He works on the common belief that people learn more from mistakes than when everything went smoothly. He doesn't think UXers can call themselves UXers if they don't do any research or speak to users. Those who haven't had a grounding in UX tend to concentrate on the visual and what looks good rather than what is functional.

For senior designers he looks for generalists who can be thrown at anything and will pick it up. Juniors can get away with being more specialist, with someone more senior sitting over them and providing guidance. The more senior a UXer becomes, the more their job becomes about managing stakeholders and driving user stories further: “Having Juniors doing the detail work frees up seniors to concentrate on the bigger picture rather than getting caught up in the minutia and losing sight of what is important.”

David Pope, UX Manager @ Suncorp
Believes: UXers should be generalists, but they don’t need to code

David started his "accidental career" in industrial design. He's since traded furniture for digital products but the methodology hasn't changed. He follows the same pattern of research, prototype, test and iterate, and is prepared to throw away any ideas that don't work for the user. When hiring, he looks for a UX Designer who is well rounded, with strong UI skills and a basis in HCD thinking. He doesn’t believe in UX designers needing to be Front-end Developers and thinks you will always get a better Front-end developer than a UXer who says they can code, and vice versa. 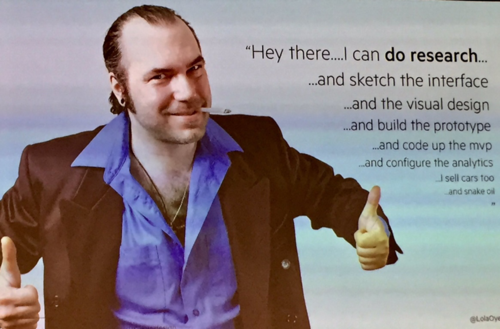 David Kennedy, Senior Mobile App UI/UX & Product Designer @ Dangerous Pixels
Believes: It depends on the size of the companies you want to work for

“The larger companies have scope for dedicated roles so the smaller the company you work for the more generalist you have to be.”

With a dad in IT and a mum who was an artist, David has always had a hold in both the technical and the creative. He started his career as a Front-end Developer 16 years ago, ran his own mobile app company for 4 years and has focused on UX/UI for the last 7 years where he has led teams for Suncorp and Deloitte. He would advise candidates to think about the kind of company they want to work for and the type of work they want to do and hone their skillset around that.

At the time of researching this article, David was Experience Design Manager at Deloitte but has since left to specialise in mobile app design again, through his own company. His advice is “don’t chase money or status, do what makes you happy and don’t be afraid to course correct (test and learn!) I’ve gone wide with my UX skillset in my career but specialising in mobile interaction design and being on the tools is what gives me the most satisfaction as a creative at heart. It’s come full circle, and that’s ok, that’s called experience. You need to find your own path.”

Gerry has been working in usability, UX and related fields for 15 years now and has seen the industry change a lot in that period. “UX is certainly more mainstream and accepted than it was. In particular, the advent of mobile devices and the expectation that we can transact online has driven a need for software and services that are quick and easy-to-use. In previous times, people often blamed themselves when they couldn't figure out how to do something online or on any electronic device. There was an expectation that you had to be "computer-literate" (a term I hate). That expectation no longer exists, and the onus is clearly on the designers of the app or service to make it straightforward.”

Gerry reckons the decision to be a generalist or specialist comes down to personal preferences. “In my case, I've been lucky to work across the entire process - from early user research to IA and UI design, to usability testing, and all the steps in between. However, I've worked with really good UX people who are not particularly strong on specific aspects. For example, some really good designers are poor at facilitating workshops or usability test sessions. I think a good UX person should have a grounding in the entire end-to-end processes, but if they have a particular passion for one area, by all means focus and excel at that.”

We get a mix of generalist and specialist roles at Xpand but many clients are looking for all-rounders who have research experience, hands-on UX, strategy and stakeholder management skills and can even do the UI and visual design too. However, is this an indication that all candidates need to be a UX unicorn or more likely an indication of companies with tight budget restraints, hoping to hire one person instead of two?

Having heard all of these successful UXers tell me about their journeys to the top, I would conclude that there is merit in finding your passion and focussing on that, once you have already tried and failed and tried again at all the other aspects of UX. A good foundation in user research is essential, whatever part of the process you want to work on. Like any job, enjoying what you do is a huge factor in your success and leaning towards an area of particular interest can never be a bad thing.

Paul Strike - Design Principal & Practice lead @ Elabor8 believes the most important thing is to “own your craft – own it and love it” and I would have to agree.

So what do you think?

What are your thoughts on UX and the ever-changing job titles in the field?
Are you a candidate starting your career in UX? Was this helpful?
Are you a specialist or a generalist UX designer and how did you get to where you are?

If you are a candidate looking for advice about your career direction or a Hiring Manager interested in recruiting top UX talent, please get in touch via email on joanna.corner@xpand.com.au

How to build your self-confidence

How to make a career change

What is imposter syndrome?

What are the biggest challenges women face in the workplace today?

How to talk about your mental health with your boss

How to stay active and sane when working from home

How to grow your team remotely